Uganda security forces have announced the arrest of at least 21 people suspected to have participated in the November 16, 2021 twin blasts near the Central Police Station in Kampala and Jubilee building along Parliamentary Avenue in Kampala.

The blasts were carried out by suicide bombers who reportedly died instantly. Islamic State militants have claimed responsibility for the blasts which occurred near the parliamentary buidlings and near a police checkpoint. The arrested suspects are alleged to be part of the Allied Democratic Forces, a militant group that operates in Uganda, and which has links in the DR Congo.

In an address at parliament on November 16, 2021, President Yoweri Museveni said the terrorists had exposed themselves at a time when Uganda's security infrastructure had improved. He said: "They have exposed themselves when we are more ready for urban terrorism. They will perish".

This incident follows a blast at a restaurant in Kampala in which one person died and seven were injured on October 23, 2021. 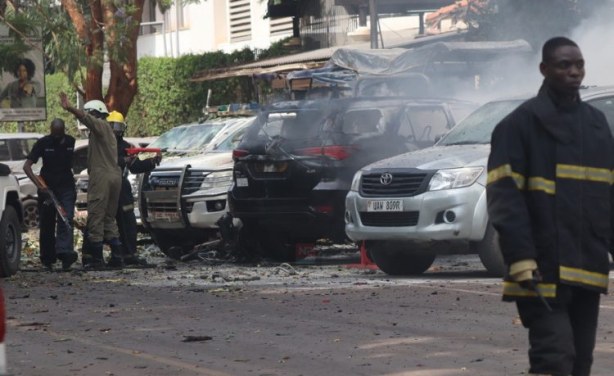 Scene of the bomb blast at Jubilee building in Kampala.