U.S. Secretary of State Antony Blinken has met with Kenya's President Uhuru Kenyatta. Part of their discussions focused on the conflict in Ethiopia that began in November 2020 when forces of the Tigray People's Liberation Front attacked a federal army base in the region. This led to Prime Minister Abiy Ahmed ordering a military offensive against the rebels, which has left thousands dead.

The Secretary stressed the need for an immediate cessation of hostilities in Ethiopia, and for all sides to enter talks.

Mohammed Yusuf for Voice of America, writes that at a news conference in Nairobi, Blinken said he and Kenyatta has discussed the crisis in Ethiopia and the African effort to resolve it, led by former Nigerian president Olusegun Obasanjo, who is the AU envoy.

"Our special envoy Jeffrey Feltman is working with high representative Obasanjo to press the parties to end hostilities immediately and without preconditions, to stop human rights abuses and violations, to provide humanitarian access for the millions in northern Ethiopia who are in dire need of life-saving supplies," he said.

Blinken also addressed his concerns on the situation in Sudan. On October 25, 2021 the Sudanese military seized power by dissolving the transitional government and arresting Cabinet ministers. The coup was led by the same man who deposed former dictator Omar al-Bashir in 2019, General Abdel-Fattah Burhan.

The UN and the AU, as well as world powers, have come out against the military takeover and have urged a return to civilian rule. Civilian prime minister Abdalla Hamdok was placed under house arrest for not supporting the latest coup but has since been released. Thousands of people took to the streets in the "marches of the millions" in protest against the latest coup and were teargassed by Sudanese forces. Secretary Blinken called for sustained regional efforts to reinstate Hamdok and the civilian-led transitional government.

Meanwhile the World Bank has halted aid to Sudan and the AU has suspended the nation's membership. 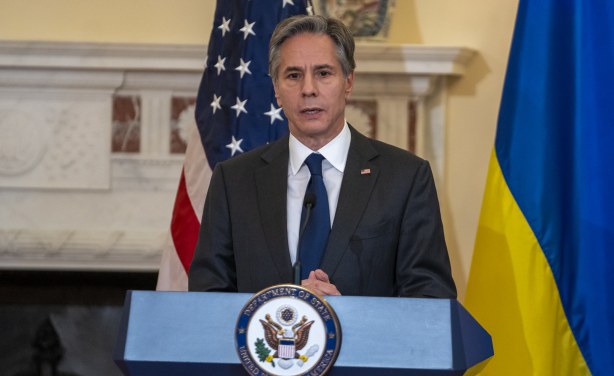 United States Secretary of State Antony Blinken at the U.S. Department of State in Washington, D.C., on November 10, 2021.