Amnesty International has said that ethnic Tigrayans in Addis Ababa, including children and the elderly, were targeted in arbitrary arrests and mass detentions after a state of emergency was enacted earlier in November 2021. Most detainees are being held without charge or access to a lawyer, Amnesty said.

This comes after the United Nation's special adviser on genocide prevention, Alice Wairimu Nderitu, called on the parties fighting in Ethiopia's war to negotiate. "What needs to happen as a matter of urgency is that the African Union Peace and Security Council needs to convene a meeting on Ethiopia ... I know that there has been violence perpetrated by both sides, but at this point in time, all parties must act in the best interests of the average Ethiopian who is sitting in his house cowering in fear, thinking about whether he could be killed or not," Nderitu said.

On November 11, 2021, Ethiopia outlined conditions for possible talks with rebels from the country's war-hit Tigray region, following days of frantic diplomatic efforts by international envoys to head off another surge in fighting, AFP reports. Foreign Ministry spokesman Dina Mufti told reporters that one of the conditions for possible talks - which he stressed have not been agreed to - would be for the Tigray Peoples Liberation Front (TPLF) to withdraw from the Amhara and Afar regions bordering Tigray.

Earlier, the United Nations said that at least 70 truck drivers delivering aid to the northern Ethiopian Tigray region had been detained on November 3, 2021, after the government of Prime Minister Ahmed Abiy declared a six-month nationwide state of emergency. Earlier, the organisation said 22 of its Ethiopian national staff were detained by the federal government in Addis Ababa. Six of the UN staffers were later released.

As the crisis in Ethiopia widens, East African mobile network operator Safaricom has announced that it has evacuated some of its employees. The Nation reports that Safaricom, whose consortium aims to start operations in Ethiopia in 2022, got the employees out of the country on November 3rd and 5th, 2021. A number of nations, including the United States, Denmark and Italy, have asked their citizens in Ethiopia to leave while commercial flights were still available, as Tigrayan rebel forces and their allies advance towards the capital Addis Ababa.

In November 2020, forces of the TPLF attacked a federal army base in the region, which led the prime minister to order a military offensive against the rebels, which has left thousands dead.

On November 8, 2021 the African Union and United Nations Security Council convened an emergency session under the title 'update on the situation in Northern Ethiopia', days after the national defence force called on former army officers to register "to thwart the ongoing assault". At the session, UN political chief Rosemary DiCarlo said the conflict had reached "disastrous proportions". The African Union envoy for the Horn of Africa and former Nigerian president, Olusegun Obasanjo, warned that "the window of opportunity is closing for a political resolution of the crisis in northern Ethiopia". 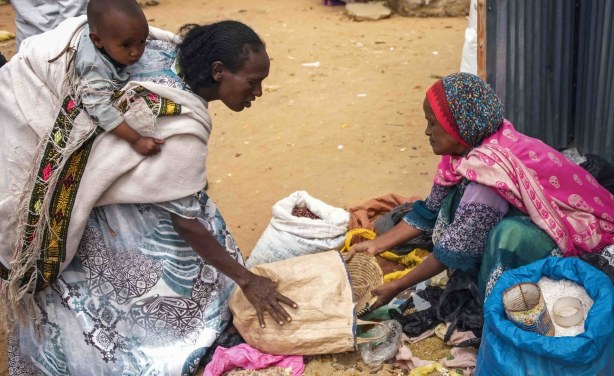 Tigrayan women at a market in Hawzen (file photo).