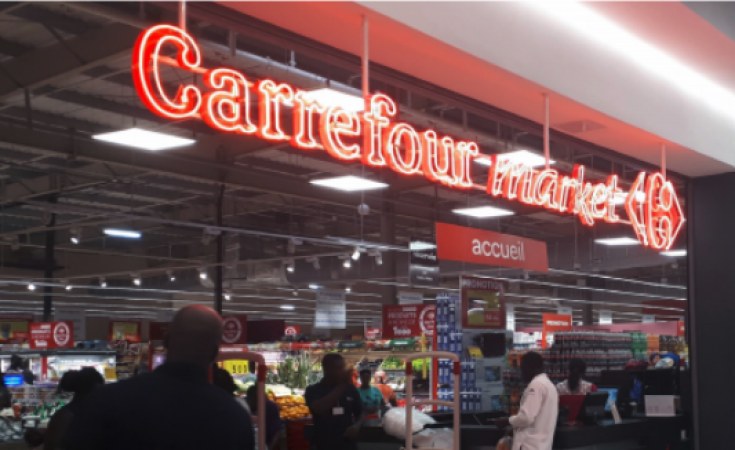 Abidjan, 22 November 2018: CFAO Retail today celebrated the inauguration of its third store in Côte d’Ivoire and its fourth in Sub-Saharan Africa. The new Carrefour Market is part of the Cosmos shopping centre opened today by His Excellency Amadou Gon Coulibaly, Prime Minister, Minister of Budget and State Portfolio.

In Yopougon, CFAO Retail operates a 1,800 square metres Carrefour Market store as well as the Brioche Dorée restaurant which is part of the Club of Brands launched by CFAO Retail in Sub-Saharan Africa in December 2015.

CFAO Retail created more than 150 direct jobs in the commune of Yopougon through the two outlets, which will be managed by Ivorians trained at Carrefour Marcory and Carrefour Market Palmeraie stores in Abidjan and at the CFAO Retail training institute in Côte d'Ivoire.

Jean-Paul Denoix, Managing Director of CFAO Retail in Côte d’Ivoire: "Yopougon is the largest of Abidjan's communes with more than 1.2 million people and a real middle-class base. Opening a Carrefour Market store and Brioche Dorée restaurant there was an obvious choice. Following Carrefour Marcory and Carrefour Market Palmeraie, we aim to offer prices everyone can afford, along with a wide selection of quality products in a pleasant environment."

The new Carrefour Market will benefit from the same supply chain resources as other stores operated by CFAO Retail in Côte d’Ivoire. Since the supermarket opened, in October 2018, more than 270 local suppliers have been listed, mainly for food produce.

Jean-Paul Denoix: "Here in Yopougon, we are surrounded by traditional markets. Our goal is to provide an offering that is as comprehensive as possible for people in the area, with a focus on quality products, hygiene and the most competitive prices. A good example of our ability to adapt is our inclusion of speciality Yopougon dishes like oven-roasted pork, which has already been a huge success."

Jean-Christophe Brindeau, CEO of CFAO Retail: "The Carrefour Market opening in Yopougon reflects the new CFAO Retail strategy in Sub-Saharan Africa, which involves rolling out a network of brands that meet the expectations of the entire population. In a similar vein, CFAO Retail is also helping to develop and transform the neighbourhood, which is one of the goals of this new generation of brands we are developing in Africa."

About CFAO
CFAO is a key player in specialised distribution in Africa and in French overseas territories, and a partner of choice for major international brands. The Group is a market leader in automotive and pharmaceutical distribution, and continues to grow in consumer goods, new technology and energy solutions. CFAO has a direct presence in 36 African countries and provides a gateway to 49 of the 54 countries that make up the African continent. The Group is also active in seven French overseas territories and in Asia. CFAO employs more than 15,000 people.
On 31 March 2018, CFAO had consolidated revenue of €4,206 million. CFAO is a subsidiary of the TTC Group (Japan).
Find out more the CFAO Group at: www.cfaogroup.comFind out more about CFAO Retail at: www.cfao-retail.com

About the Carrefour Group
With a multi-format network of some 12,000 stores in more than 30 countries, the Carrefour Group is one of the world's leading food retailers. Carrefour welcomes 105 million customers throughout the world and recorded revenue of €88.24 billion in 2017. It has more than 380,000 employees who help to make Carrefour the world leader in the food transition for everyone, providing everybody with access to high quality, affordable food every day, no matter where they are. For more information, visit www.carrefour.com