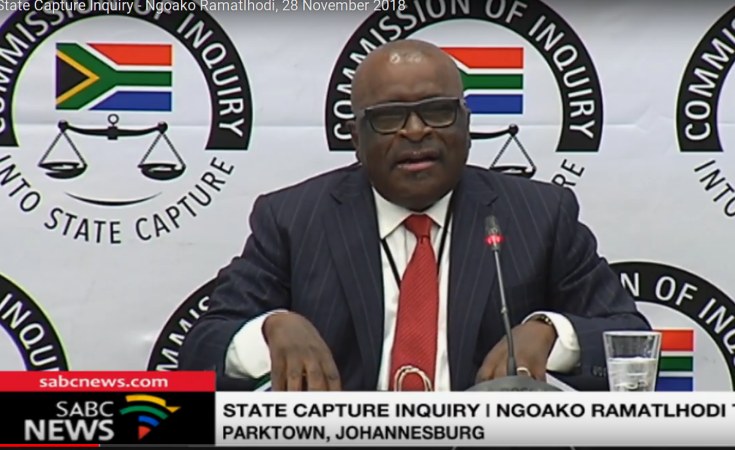 In his testimony he spoke to the reasons he thinks he lost his ministerial position. Ramatlhodi said that Black Economic Empowerment was meant to benefit South Africans. He said he believes he was removed as Minister of Minerals because he "refused to amend mining regulations to qualify naturalised citizens to obtain BEE licences", an amendment that he was also asked by then Eskom Chief Brian Molefe and then Eskom chairman Ben Ngubane to implement.

After the Eskom meeting, he was called to Pretoria by then President Jacob Zuma who praised him for his work at the department and told him he was being moved to the Dept of Public Service and Administration.
Soon after the appointment of Mosebenzi Zwane as Minister of Mines, the Guptas were sold the Glencore Mine. Zwane is alleged to have close ties with the Gupta family.

He also mentioned "irregularities in the presidential office where two secretaries – one a Gupta appointment, the other based at the presidential official residence, Mahlamba Ndlopfu, in Pretoria".
The National Executive Council of the African National Congress he said, "were powerless when facing the friendship between Zuma and the Guptas".

He said that "Zuma had auctioned executive authority to the Guptas".

Ramatlhodi said "it took a balance of forces to change the balance of power and eventually remove Zuma from power. The ANC National Executive Council will look at a constitutional amendment to ensure that power doesn't lay in the hands of one individual".