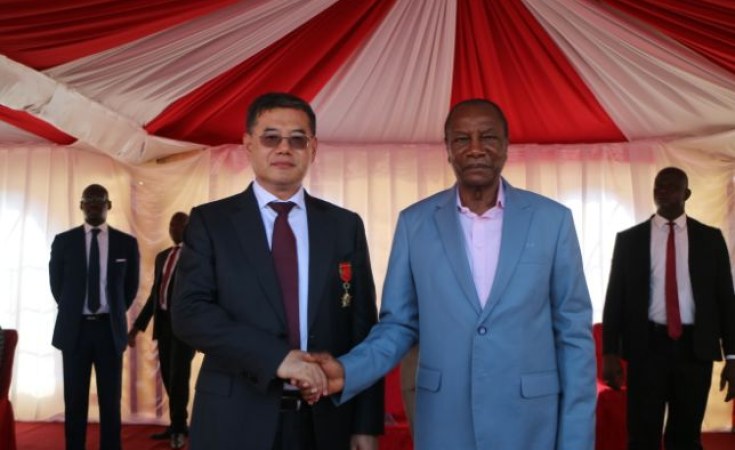 Boké (Guinea), March 29, 2019 -The SMB-Winning Consortium, in the presence of its President and CEO Mr. Sun Xiushun, the President of the Republic of Guinea, His Excellency Professor Alpha Condé, and several members of the Guinean government - represented by the Minister of Mines and Geology, Mr. Magassouba, and the Minister of Investment and Public-Private Partnerships, Mr. Curtis - together laid the foundation stone for a new railway line on Friday.

This event marks the beginning of the renewal of the Guinean rail sector. The last construction of a railway line in the country dates back to the 1970s. With this new Dapilon-Santou railroad, which opens up part of the country from East to West, Guinea is accelerating its transition to a more diversified and extensive rail network with a view to sharing this infrastructure and use it in multiple ways in the service of Guinea's long-term development.

The railway will connect the Dapilon terminal of the Boké port and the deposits of SMB at Santou and Houda near the Prefecture of Télimélé. Approximately 135 kilometers long, it will be composed of numerous engineering structures, including 23 bridges and 3 tunnels for a total investment valued at $1.2 billion. In parallel, the Dapilon terminal will benefit from additional investments in its infrastructure in order to become a real intermodal maritime and rail terminal, while the Port of Boké has already been registered in the International Maritime Organization's (IMO) integrated global maritime information system in 2018.

With the construction of this railway, the SMB-Winning Consortium is becoming a major player in the infrastructure and transport sector in Guinea, having already contributed to the renovation and construction of many roads, including a 16-kilometre paved road, the construction and management of two river terminals (Katougouma and Dapilon) for the Port of Boké and now in the rail sector with this new Dapilon-Santou connection.

In terms of local benefits, the construction of this railway will create tens of thousands of jobs, train many Guineans and benefit many Guinean companies hired as service providers on this major infrastructure project. To ensure that the CSR policy applied to the construction of this railway line meets the highest international standards, the SMB-Winning Consortium relies on two partners of excellence in the field: Guinea-based Société d'Expertises Environnementales et Sociales (SEES) and international consultancy firm Louis Berger.

In addition, this railway is part of the project to develop an agricultural growth corridor. The SMB-Winning Consortium is committed to promoting and supporting the establishment and development of numerous agricultural projects along the railway line with a view to contributing to the diversification of the Guinean economy and the creation of sustainable jobs. The SMB-Winning Consortium already has significant experience in agricultural development through numerous projects in the Boké region.

Ratified unanimously by the National Assembly in December 2018, the SMB-Winning Consortium signed three agreements with the Government of the Republic of Guinea for the implementation of an integrated project for the Boké region representing a $3 billion investment that is part of the Special Economic Zone initiated by the government. These agreements outline the construction of a railway line in a corridor extending from the Boffa region to the Boké region, the production and industrial exploitation of bauxite resources in the new mining areas of Santou II and Houda and the construction and operation of an alumina refinery in the Boké Special Economic Zone.

"The construction of this new railway reflects Guinea's attractiveness to mining investors," said Abdoulaye Magassouba, Minister of Mines and Geology. Government reforms have allowed companies like the SMB-Winning Consortium to grow rapidly and place Guinea among the top three bauxite producers in the world within a few years."

For Mr. Sun Xiushun, President and CEO of the SMB-Winning Consortium: "Laying this cornerstone in the presence of the President of the Republic of Guinea testifies to the win-win partnership that the Consortium has established with Guinea. It is through common values - mining and industrial development, local content and employment - that Sino-Guinean friendship is embodied, taking shape through large-scale projects such as this new railway line."

"Since the beginning of our project, the inclusive and sustainable dimension has been essential, as evidenced by the importance we give to local content and community relations, explains Mr. Wazni, Chairman of the Board of Directors of the Société minière de Boké (SMB). It is by being fully involved in Guinea's change and development that the SMB-Winning Consortium will succeed in its long-term project."

"With the start of work today, we aim to start operations in 2022, says Frédéric Bouzigues, SMB's CEO. I would like to remind you that our environmental and societal commitments are at the heart of the Consortium's strategy and are included in the specifications for the construction of the railway. Our CSR policy is defined by the precise application of the recommendations of our Environmental and Social Impact Studies (ESIAs), which will be followed by Environmental and Social Management Plans (ESMPs) and Resettlement and Compensation Action Plans (RAPs)."

About the SMB-Winning Consortium
Founded in 2014, the SMB-Winning consortium brings together four global partners in the extraction, production and transport of bauxite: Singapore's Winning Shipping Ltd, a leading Asian shipping company; the Yantai Port Group; UMS, a transport and logistics company with more than 20 years' experience in Guinea; and Shandong Weiqiao, a leading Chinese aluminum producer. The Republic of Guinea is a 10% shareholder.
Since its inception, SMB-Winning has invested more than US$1 billion in its extractive activities in the Boké region. The consortium, which directly employs more than 9,000 people, has also built and manages two river ports.
For more information, visit smb-guinee.com