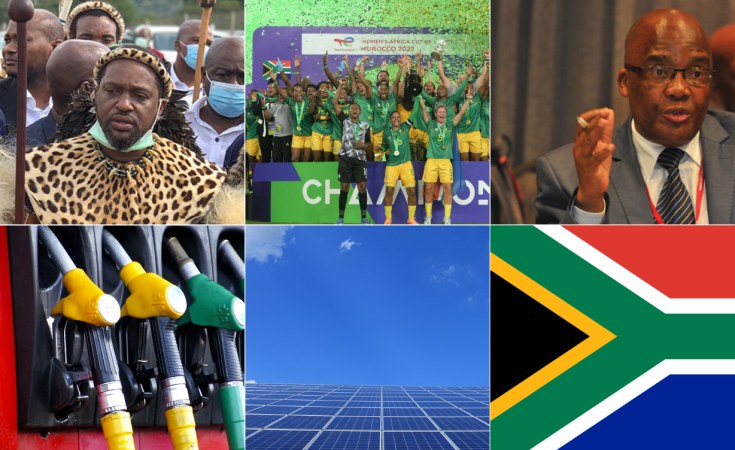 No End In Sight to Legal Challenge for Zulu Throne

The Zulu royal household has been in disarray since the passing away of long-serving monarch King Goodwill Zwelithini Zulu in March 2021 and the subsequent passing away of the Regent, Queen Mantfombi Dlamini, in April 2021. allAfrica reports that the late king in his Will,  nominated his third wife, the late Mantfombi Dlamini Zulu, as the regent. Queen Dlamini Zulu, in turn, wrote her own Will in which she nominated her own son, Misuzulu Sinqobile kaZwelithini, as the successor to the late Zulu king. Prince Misuzulu's claim to the throne in May 2021 was strongly contested at the time. The ongoing, costly and divisive legal battle in the Zulu royal family is far from over as backers of Prince Simakade Zulu, the first-born son of the late King Goodwill Zwelithini, say they are still preparing their high court application to challenge King Misuzulu for the throne, IOL reports.

President Cyril Ramaphosa is meeting Banyana Banyana, the WAFCON 2022 champions at the Union Buildings in Pretoria today. The president praised the players for their outstanding performance and has joined the calls for men and women in sporting codes across the board, to be paid equally without further delay. This comes after Sports, Arts and Culture Minister Nathi Mthetwa met the team at OR Tambo Airport on their arrival from Morocco where he pledged a bonus of R5.8 million - in addition to the amount of R9.8 million promised by the South African Football Association, if they won the tournament.  Advocates for transformation and gender equality have lashed out at the bonus pay structure for the senior national women's soccer team Sowetan Live reports.

Home Affairs Minister Aaron Motsoaledi says gaps in SA's immigration policies have created a free-for-all, resulting in the country dishing out services to foreign nationals at no cost, SowetanLive reports. The ANC is proposing a complete overhaul of the immigration system, where it says some sectors have been overburdened. One of the proposals is that of an  immigration board that compromises various government departments, civil society as well as organised labour.  The party also said that the system is being abused by those wanting citizenship.

Petrol Price May Decrease By R1 or More In August

Motorists hit hard by the rising petrol price in recent times, may see some relief at the pump with a decrease in the price of fuel expected to be announced soon for August. IOL reports of a possible decrease of R1 or more. An end to the government's fuel "tax holiday" will see the reduction go from a possible R1,89 to R1,14 for 95 unleaded, while diesel will reach a possible R1,52 but with the end to the "tax holiday" will only see a 77 cents reduction. T he government introduced a "tax holiday" or exemption on the country's fuel products for a limited period, in light of the rising fuel prices and other economic challenges, like the price of foodstuffs.  The general fuel levy is a tax on each litre of fuel sold and is pegged at R3.93 a litre - up from R3.77 last year. The Road Accident Fund levy is R2.18 a litre - up from R2.07 last year. Combined, they add R6.11 to every litre of petrol and diesel sold in the country,  according  to the Automobile Association.  A petrol price drop for August will only happen if the international oil price does not change too drastically, by going up in the next few days.

Independent Power Producers (IPPs), the business community and the public welcomed the plan by the government to end the load shedding by Eskom. The crippling power cuts over the past few months impacted households and livelihoods as many small businesses suffered and some closed their doors. In a televised address, President Cyril Ramaphosa spoke among others, of improving the performance of power utility Eskom's existing fleet of power stations and of assisting households to acquire solar panels.  Now, according to IOL, energy experts warn that the cost of acquiring electricity from private companies may prove expensive and would impact the poorest of the poor South Africans the most.