Nigeria's former finance minister Ngozi Okonjo-Iweala, has been named the 2020 African of the Year, becoming the first woman to win this award. It comes in recognition of her charge for the equitable distribution of the coveted Covid-19 vaccine in Africa when it arrives. Okonjo-Iweala was said to have expressed her delight at the recognition and dedicated the award to Africans facing the health and socio-economic challenges of Covid-19 during a very difficult year. The award comes as Interpol has warned of organised crime during the upcoming COVID-19 vaccination campaigns, including fake vaccines and the theft of supplies.

Okonjo-Iweala is on the brink of yet another first, as a finalist to the top post as the seventh Director-General of the World Trade Organization (WTO), a position which will make her the first African and the first woman to lead the prestigious trade body. Okonjo-Iweala emerged the overwhelming choice of WTO member-countries, following a keenly contested race in which she received the majority support of the 164 member countries. 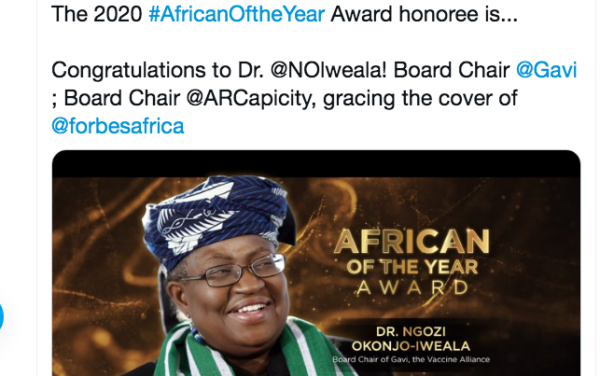