What a year 2020 has turned out to be. It is almost with certainty that by the time the first quarter of the year had passed, all plans were put on the backburner because of the global Covid-19 pandemic. So in keeping with the topsy turvy year, we look at what the high and lows were on the continent, starting with November to January, 2020. Despite the challenges and disappointments along the way, there were a few highlights and progress made in some areas.

Looking at November, Nigeria's President Muhammadu Buhari inaugurated the Waltersmith modular refinery in Warri State. At 5,000 barrels per day, the president said it will make petroleum products available in the country and eliminate importation. This also comes at a time when Covid-19 has had a huge impact on the petroleum industry in Nigeria and internationally, raising the urgent question of the need to diversify the economy. In October, Nigeria was shaken by protests there, mainly by the youth, against the brutality, corruption and murder allegedly committed by the Special Anti-Robbery Squad (SARS) over several years against citizens. These protests under the #EndSARS banner, saw many unarmed protesters lose their lives, evoking a national and international outcry. Hackers gained access to the central bank website, saying it would attack federal government agencies' websites, in solidarity with the protesters clamouring for the reformation of the Nigerian police. In September, Zimbabwe's Hwange National Park was the site where two Chinese companies began drilling for coal. Rangers reportedly made arrests, only to have them return with permits to go ahead! With the cut in passenger flights, August saw the compeition for cargo flights increase. Kenya Airlines and Ethiopia Airlines found themselves in a spat over the 737 Boeing used by Ethiopia Airlines to fly cargo out of Kenya. Earlier in April, Kenya Airways contested a government deal allowing Ethiopian Airlines to operate passenger planes grounded by the coronavirus for shipment of cargo from the Jomo Kenyatta International Airport in Nairobi to Europe and Asia. It claimed that the deal gave Ethiopian Airlines an advantage at a time when Kenya's international passenger travel was banned. On July 1, despite the harsh impact of Covid-19 on economies worldwide, Tanzania could smile at their new status as a lower middle-income country - a status given it by the World Bank. In June, the Nigerian central bank began crediting households and small and medium enterprises there, with Covid-19 funds to keep them afloat. May was the time when small businesses were feeling the pinch brought by Covid-19 and the Ghanaian government stepped in to assist its over 2,000 small and medium enterprises that needed help through stimulus packages. April saw airlines being impacted by Covid-19 and Ethiopian Airlines, the continent's largest, was one of the first to suffer route cuts. March was when Covid-19 hit the African continent hard. It was also the time when Nigeria's currency began fluctuating but finally bounced back, after many days of panic buying, as speculation grew that the Nigerian central bank may devalue the naira. The economy has since experienced a recession and a number of downgrades by ratings agencies, Fitch and Standard & Poors. February saw Africa's richest man Aliko Dangote commence testing of the U.S.$2 billion Dangote fertiliser plant, termed the biggest project in the entire fertilizer industry in the world. In January 2020, the carrier was ordered to pay Zimbabwe U.S.$870,000 in meteorological, or weather fees, adding to the South African government's woes of keeping the airline in flight mode. South African authorities said they had "never heard" of such a fee. 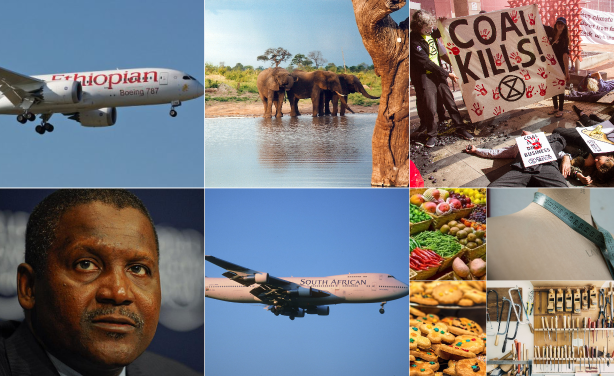