Attacks on the Palestinian people in the Gaza strip have galvanised a variety of South African people and groups who vocalised their support for the victims of the violence. A group of Jewish people has asked for signatories to a "Not in our name" statement. The statement, which the group will publish next week, condemns recent actions by Israel against Palestinians, and rejects the "unconditional support for Israel's disproportionate violence" as expressed by the South African Jewish Board of Deputies and the South African Zionist Federation. "These organisations neither represent us nor the diversity of Jews in this country," it says.

This comes after Palestinian supporters demonstrated in Cape Town where they marched to Parliament to protest the deadly Israeli airstrikes. The demonstration was likely the largest of its kind for 2021, according to James Stent and Nathan Geffen of GroundUp. Further, calls have been made for the ruling African National Congress (ANC) to impose sanctions on Israel and for the middle eastern state's embassy in Pretoria to be closed. "What we call for, is the closure of the [South African] Embassy in Tel Aviv," said Mandla Mandela, ANC MP and grandson of Nelson Mandela. He said that on Nelson Mandela International Day on July 18, 2021, crowds should convene in front of the Israeli embassy in Pretoria to have the government "shut down and remove" the embassy from South Africa.

The government has also expressed its support for the people of Palestine. "The recent vicious attacks by Israel on Palestinian people and the forced removal of Palestinians from their homes is clear evidence of the absence of peace and security for millions worldwide ... We call on the UN and the Gulf Council to be more resolute in pursuing freedom for the people of Palestine," said International Relations and Cooperation Minister, Naledi Pandor. 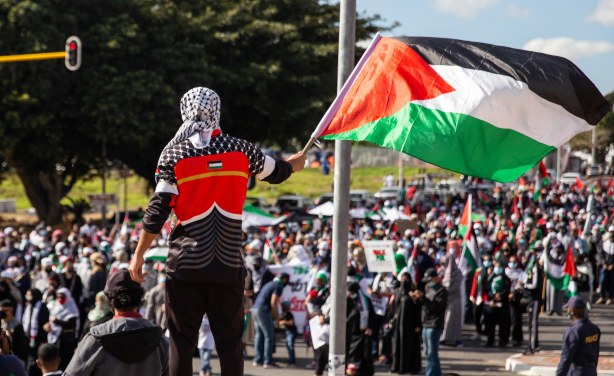 Thousands of people marched in Cape Town in solidarity with Palestinians.