A United Nations report alleges that recruits of the Somali National Army were involved in the Tigray war in Ethiopia, alongside Eritrean troops. The UN Human Rights Council report on human rights in Eritrea says there are credible reports that Somali soldiers were removed from their training camps and taken to the frontline in Tigray. Sudanese international law scholar Mohamed Abdelsalan Babiker, the UN Special Rapporteur who authored the report, did not travel to Eritrea or the frontline in Tigray, but said he received information indicating Somali soldiers were drafted to the battlefront. Somalia's Ministry of Information has denied the reports. Speaking at a news briefing on June 10, 2021, Minister for Information Osman Dubbe said there were no Somali troops inside the troubled region.

The report comes as the UN's humanitarian chief warns that about 90% of people in Tigray in northern Ethiopia are in desperate need of food aid, with hundreds of thousands living in "famine conditions". Radio France Internationale reports that no one knows how many people have been killed since political tensions between Ethiopian President Abiy Ahmed's government and the Tigray leaders who used to dominate Ethiopia's government exploded into war last November. But the UN says an estimated two million people have been displaced, civilians have been been killed and injured and rapes and other forms of sexual violence have become widespread and systematic.

The suffering has been given a human face by a Voice of America report about children hospitalised in Mekelle, Tigray's capital. Michaele Kahsay, 16, was at school when it was hit by heavy artillery. He lost the lower part of his left leg and his brother, 19, was killed in the attack. Michaele told VOA that the region is under attack by federal forces, Eritrean soldiers and militias.

The government says it is fighting the Tigray People's Liberation Front, not the people of Tigray, as the group continues to stage attacks after losing control of most of the region. The Ethiopian government also says "it takes very seriously" its responsibility to alleviate the suffering of people in Tigray. 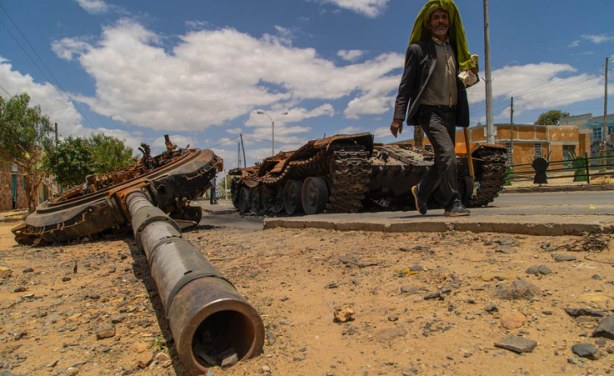 A man passes by a destroyed tank on the main street of Edaga Hamus, in the Tigray region, in Ethiopia, on June 5, 2021.