"It was New Year's Eve, December 31 2018, and the next four days would change our lives forever. My brother would become one of the thousands of people kidnapped for money each year in Nigeria. In the first six month of 2021, at least 2,760 people were kidnapped in the country," writes Dr. Maymunah Kadiri about her brother's kidnapping in Nigeria and the psychological impact it had on her family.

Kidnapping remains a major security challenge in Nigeria. Hundreds of learners have been taken in various incidents in the northern part of the country since December 2020. Most have been released after ransom negotiations, but only after weeks or months in captivity.

But even when the kidnapping is over, the ordeal continues - as Kadiri's family discovered. Kadiri explains that for her parents, the stress took a heavy toll. Despite receiving counselling and debriefing, my brother had days of poor sleep, nightmares and he became more suspicious of people and was unable to attend events. Many have called for the government to be proactive in dealing with security issues and threats.

President Muhammadu Buhari has ordered military operations and air strikes on bandit camps but attacks have not stopped. Some local governors have attempted amnesty deals with the bandits but most have failed. Katsina, Niger, Zamfara, and Kaduna have put restrictions in place to stop armed gangs who travel by motorcycle and camp out in forests. Restrictions include bans on the sale and transporting of petrol in jerry cans and the transporting of firewood. 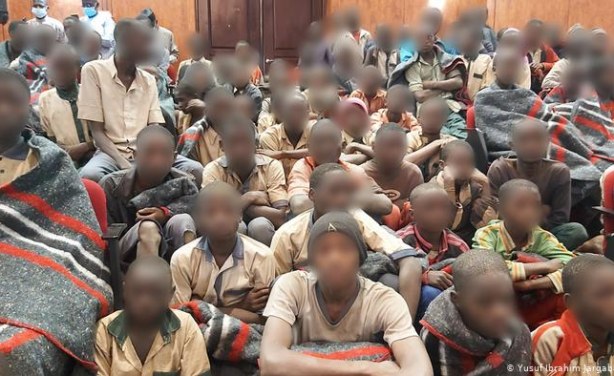 These Nigerian schoolboys were freed after being kidnapped. (file photo).