Abiy Sworn In as Ethiopian Prime Minister As War Continues

Ethiopian Prime Minister Abiy Ahmed was sworn in for a new five-year term on October 4, 2021 amid the ongoing war in the country. African heads of state from Nigeria, Senegal, Uganda and neighboring Somalia, Djibouti, Kenya and South Sudan attended the ceremony in Addis Ababa, RFI reports. Sudan was not in attendance, as there have been escalations in border tensions.

The first three years of Abiy's administration have been overshadowed by the ongoing war in the northern Tigray region of the country, where tens of thousands of people have been killed. The war began last November when Abiy accused the Tigray People's Liberation Front (TPLF) rebel group of attacking federal army camps.

The UN has repeatedly said that the Tigray region is entering famine phase as the government continues to block humanitarian aid into the area. Amidst heavy criticism from the United States, Europe and other governments, the Ethiopian foreign ministry kicked out seven senior UN officials last week.

Ethiopian officials say that the governments who decry their stance ignore the human rights abuses committed by the TPLF, who were the former party in power. "There has been an effort to destabilise our sovereignty, unity and societal co-existence," President Sahle-Work Zewde told lawmakers after Abiy's swearing-in ceremony.

In his inauguration speech, Abiy said that the government planned to hold an inclusive national consultative forum with a view to narrowing political differences and avoiding internal strife. He also addressed the issue of the Grand Ethiopian Renaissance Dam (GERD), saying it would will play a crucial role in strengthening regional integration. 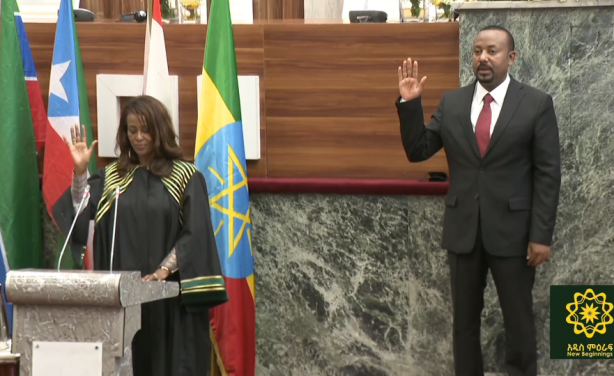