Thousands of workers affiliated to the National Union of Metalworkers of South Africa (NUMSA) have gone on an indefinite strike across the country. The strike, which involved some of NUMSA's 432,000 workers, resembles one in 2014  that lasted for four weeks and cost the steel and engineering sector between U.S.$20.8 million and U.S.$36.6 million per day, or U.S.$396 million for the broader economy, writes Ray Mahlaka for Daily Maverick.

News of the strike sent the share price of ArcelorMittal SA, one of the country's big steelmakers, nearly 1% lower, wiping off U.S.$4.7 million from its value on the Johannesburg Stock Exchange. The steel and engineering industry is an important component of SA's economy: it represents nearly 2% of the country's economic output and is responsible for 190,000 direct jobs.

Phakamile Hlubi-Majola, NUMSA spokesperson, said the deadlock over negotiations is a slap in the face of workers who decided to forego a wage increase in 2020 and agreed to a standstill agreement, due to the Covid-19 pandemic. Employer associations have offered a three-year agreement with a 4.4% increase for the first year. This was rejected by the union representatives.

"We will not accept 4.4%. Even 8% is small but we can make it work. The money we make is not enough. The employers can take their children to university, we can't do that," a NUMSA member. 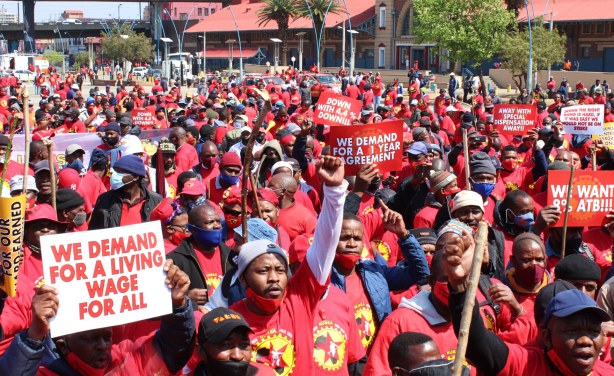 Hundreds of NUMSA workers marched from the Mary Fitzgerald Square to the Metals Engineering Industries Bargaining Council office in Marshalltown to hand over the memorandum of their demand on Tuesday. It was part of the national strike by steel engineering workers who are demanding an 8% wage increase, among other things.