Half of wastewater treatment works in South Africa fail to treat sewage properly and in many cases fail to treat it at all, writes Steve Kretzmann for GroundUp. This is according to the long-awaited 2022 Green Drop report.

An official description of the initiative reads: "The aim of the Green Drop programme is to create a paradigm shift by which wastewater operations, management and regulation is approached. It promotes incentive-based regulation; establishing excellence as the benchmark for wastewater services."

Anthony Turton from the Centre for Environmental Management at the University of the Free State says this represents "a tsunami of human waste inundating our rivers and dams, without respite, for more than a decade".

The number of critical treatment works listed in the last report in 2013, was 248. The latest Green Drop report, released on 30 March 2022, reveals wastewater compliance has plummeted in the intervening years. Of 850 municipal wastewater treatment works, 334 (39%) are in a critical state, obtaining a score of 30% or less.

The average Green Drop score across all provinces was 50%, indicating that about half our raw sewage and industrial waste is not being treated to standards which are already inadequate, according to scientists in the fields of chemistry and epidemiology. The average score in 2013 was 61%.

Publication of the report came after after wastewater samples in the provinces of Gauteng, KwaZulu-Natal, the Free State and the Western Cape detected sustained higher levels of the SARS-CoV-2 virus. 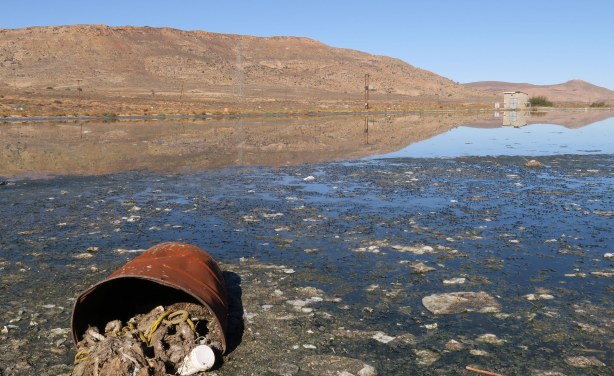 This is the failing sewage works in Springbok, Northern Cape, one of 334 in the country which obtained a Green Drop score of 30% or less.