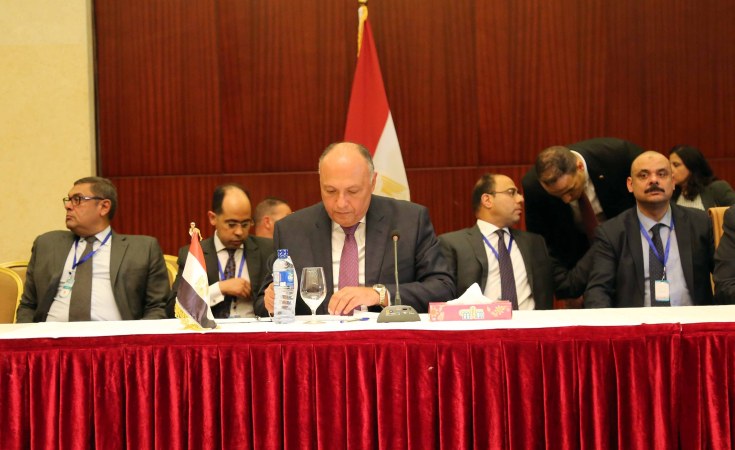 Ministry of Foreign Affairs of Ethiopia
Previous negotiations between Ethiopia, Sudan and Egypt in Addis Ababa over the Great Ethiopian Renaissance Dam have failed to find a resolution of the dispute over the dam's potential to disrupt the flow of the Nile.
allAfrica.com

Cape Town — Days after President Donald Trump accused Ethiopia of breaking a deal he had negotiated over Egypt's rights to water from the Nile, the African Union is kick-starting renewed trilateral talks on the issue between Ethiopia, Egypt and Sudan.

The building of the massive Grand Ethiopian Renaissance Dam (GERD), the centrepiece of Africa's biggest hydro-electric power project, across the river is causing tensions in the region, particularly over its potential to disrupt Egyptian agriculture.

The African Union stepped into the dispute earlier this year when its current chair, President Cyril Ramaphosa of South Africa, learned of letters sent to the United Nations Security Council by Egypt, Sudan and Ethiopia in May and June.

In the spirit of finding "African solutions to Africa's problems", he consulted with the leaders of the three countries, and  the ensuing negotiations reportedly achieved "tangible results". But the AU initiative is yet to produce a firm agreement.

After a seven-week break in talks, Ramaphosa announced early on Monday that after "extensive consultations" with President Abdel Fattah al-Sisi of Egypt, Prime Minister Abiy Ahmed of Ethiopia and Prime Minister Abdalla Hamdok of Sudan, they will resume on Tuesday.

Ramaphosa asserted that the resumption of the talks "is indicative of the strong political will and commitment" by the three leaders to "the peaceful and amicable resolution of the GERD matter."

His statement followed three days after Trump publicly put pressure on the Sudanese leader to help resolve the dispute.

During a three-way link-up with Hamdok and Israeli Prime Minister, Benjamin Netanyahu, the U.S. president claimed that "I had a deal done for them" over the dam.

"[T]hen unfortunately Ethiopia broke the deal," he added, "which they should not have done, it was a big mistake." He went on to generate headlines by suggesting that if the dispute is not resolved, Egypt will "blow up that dam".

Trump has previously called Sisi a "great president", and his administration has suspended and delayed development assistance to Ethiopia over the dispute. The decision has been criticised by previous Africa envoys of both Democratic and Republican administrations.

Johnnie Carson, Assistant Secretary of State for Africa during the first Obama administration has said the move is "misguided and shortsighted." Herman J. Cohen, who held the same office during the George W. Bush administration, was reported as saying it "makes absolutely no sense".

Trump's Dangerous Rhetoric Toward Ethiopia Is Indicative of a Larger Problem

Ethiopia's Grand Dam Talks Collapse
Tagged:
Copyright © 2020 allAfrica.com. All rights reserved. Distributed by AllAfrica Global Media (allAfrica.com). To contact the copyright holder directly for corrections — or for permission to republish or make other authorized use of this material, click here.