Ahmed Omar Abu Ubaidah, the leader of Al-Shabaab militants based in Somalia, is calling for attacks against American and French interests in Djibouti before key presidential elections on April 9, 2021. The Al-Shabaab leader accuses the Djibouti government of "turning the country into a military base from where every war against the Muslims in East Africa is planned". The United States Africa Command (AFRICOM), which has a base in Djibouti, says it is aware of the recent threats. The U.S. military has also been conducting airstrikes against Al-Shabaab but there have been no confirmed strikes since U.S. President Joe Biden took office. Earlier this month, Somali military officials expressed concern at the reduction of airstrikes, which they fear could give the militant group additional momentum. Djibouti voters go to the polls where incumbent Ismail Omar Guelleh is seeking a fifth term in office. 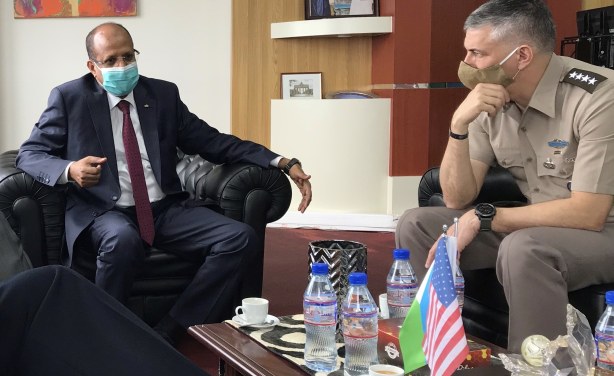 U.S. Army General Stephen Townsend, commander of U.S. Africa Command, meets with Djiboutian Foreign Minister Mahmoud Ali Youssouf on November 26, 2020. Al-Shabaab leader Ahmed Omar Abu Ubaidah accuses the Djibouti government of "turning the country into a military base from where every war against the Muslims in East Africa is planned".