Chairperson of the African Union Commission Moussa Faki Mahamat has called for the urgent restoration of order, peace and stability in South Africa and the full respect for the rule of law.This as parts of Kwazulu-Natal province and Gauteng province have experienced violent protests, which claimed scores of lives and has seen incidents of looting of public and private property as well as the destruction of infrastructure.

By July 13, 2021, at least seventy-two people were killed in riots and looting, amid protests following the jailing of former president Jacob Zuma. Violence erupted last week when Zuma began serving a 15-month jail sentence for contempt of court. Looters have vandalised shopping malls, other retail outlets and businesses in Gauteng province, which includes the country's largest city of Johannesburg, and in Zuma's home province, KwaZulu-Natal.

In an address to the nation on July 11, 2021 about the extension of the country's novel coronavirus lockdown measures, President Cyril Ramaphosa addressed the violence, saying that "those who are involved in acts of violence will be arrested and prosecuted".

Zuma's imprisonment follows a Constitutional Court judgment that found him guilty of contempt of court for disobeying its earlier order that he appear before the Zondo Commission of Inquiry into State Capture to answer allegations from scores of witnesses about his role in state capture. 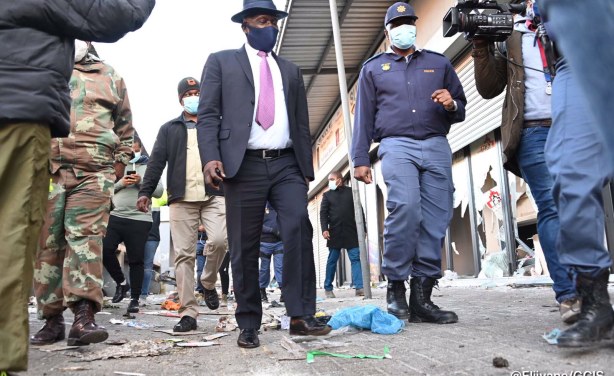