The 27th edition of the Pan-African Festival of Cinema and Television of Ouagadougou (FESPACO) takes place in Burkina Faso from October 16 to 23, 2021. This year's edition will be themed Cinemas of Africa and the Diaspora.

The popular festival was initially set for February 27 - March 6, 2021 but was postponed because of the novel coronavirus pandemic and six years of a brutal insurgency. Burkina Faso is also in the middle of a conflict with militant groups linked to the Islamic State and Al Qaeda.

The festival will have film screenings and exhibitions, forum debates of films in competition, thematic conferences, and meetings. Seventeen feature-length films have been chosen from among 1,132 entries for the top accolade the "Étalon de Yennenga" (Stallion of Yennenga) awarded to the African film that best showcases "Africa's realities."

FESPACO has been running since 1969. It became an institution in 1972 and a biennial event from its sixth edition in 1979. Based in Ouagadougou, FESPACO has a statute and is recognized by African states. It is a public administrative institution under the Ministry for Culture of Burkina Faso. 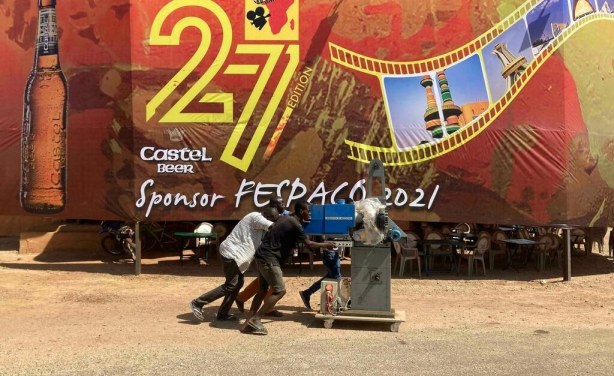 Staff at FESPACO headquarters move a projector in preparation for screenings on October 17, 2021.