As chaos unfolds on the streets of South Africa, analyses abound of what the drivers of the unrest are. Some point to criminality, others to a political assault on the government fuelled by inter-African National Congress (ANC) rivalries. Still others emphasise unemployment and inequality as key drivers, likening the mobilisations to food riots, writes Jane Duncan for Daily Maverick.

Others emphasise unemployment and inequality as key drivers, likening the mobilisations to food riots. It is significant that at a Security Cluster briefing, State Security Minister Ayanda Dlodlo conceded in response to a journalist's question that they were investigating the possibility of former members of the State Security Agency being behind the mobilisations. Triggered by former president Jacob Zuma's imprisonment, the mobilisations appear to be part of a fight-back against attempts to rein in the State Capture project: a fight-back that has been termed State Recapture or State Capture 2.0.

Meanwhile, residents who witnessed unrest in Brakpan said many of those looting are hungry and unemployed. Looters were seen selling the goods they had stolen on the street, writes Kimberly Mutandiro for GroundUp. "We have been hungry, no food or bread ever since shops around here were looted. This time there is no running to the mall because it has also been broken into," said resident Nomsa Nkosi.

"People may have been stealing in the name of Jacob Zuma, but now even hungry kids are helping themselves. Life is tough out there," she said. Aziza Botha, who was standing and watching with her teenage son, said, "Most of the people stealing are hungry and unemployed. This stealing shows some of the effects after government eliminated the [R350 Covid-19] grant."

Violence erupted last week when Zuma began serving a 15-month jail sentence for contempt of court. Looters have vandalised shopping malls, other retail outlets and businesses in Gauteng province, which includes the country's largest city of Johannesburg, and in Zuma's home province, KwaZulu-Natal. In an address to the nation on July 11, 2021 about the extension of the country's novel coronavirus lockdown measures, President Cyril Ramaphosa addressed the violence, saying that "those who are involved in acts of violence will be arrested and prosecuted". 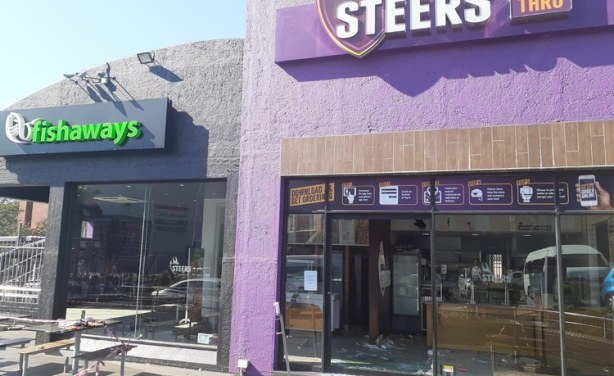 Volunteers are signing up fast to help businesses affected by the looting which has swept Gauteng and KwaZulu-Natal this week.