Southern African and Rwandan regional forces which have been fighting in Mozambique's northern most province of Cabo Delgado since July 2021 are dispersing insurgents - but also driving them further west and south, displacing more civilians, reports Joseph Hanlon for Mozambique News Reports And Clippings.

The number of internally displaced persons has jumped from just under 800,000 to 946,508 since February 2022, according to the UN. Of the newly displaced people, 83,983 people had fled attacks in Ancuabe and Chiure districts in June 2022, as the war spread south, leading to a "deteriorating humanitarian situation in southern Cabo Delgado," the UN's Office for the Coordination of Humanitarian Affairs said.

"They are not keeping Mocimboa da Praia and Palma districts safe - delaying any chance of  oil company Total, resuming work until 2023 at the earliest. This is a growing guerrilla war, with significant fighting continuing in Macomia and Ancuabe as well as Mocimboa da Praia. Both sides report successful attacks on a base of the other side, Hanlon reports. 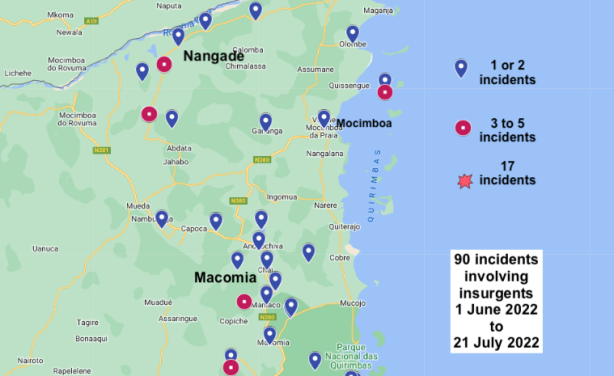 There were 90 incidents of violence in the seven weeks from June 1 to July 21, almost two incidents a day. War fatalities are now 4,131, says the writer.