U.N. experts say the ice cap on Africa's biggest peak, Tanzania's Mount Kilimanjaro, is among the famous glaciers predicted to melt by 2050 because of climate change. While scientists are looking into whether they can halt the melting, those who depend on the mountain for tourism worry about the future, reports Charles Kombe for VOA.

An Intergovernmental Panel on Climate Change report listed the melting of ice and snow as one of the 10 key threats from climate change. The United Nations says the glacier could be saved only if the world limits global warming to 1.5 degrees Celsius.

Mount Kilimanjaro is a symbol of fortune, and it brings tens of millions of dollars to the region through 50,000 tourists who climb the mountain annually.

A report by the World Meteorological Organisation and other agencies forecast that at current rates all glaciers on Mt Kenya, Tanzania's Kilimanjaro, and Uganda's Rwenzoris will disappear in the next two decades because of climate change. 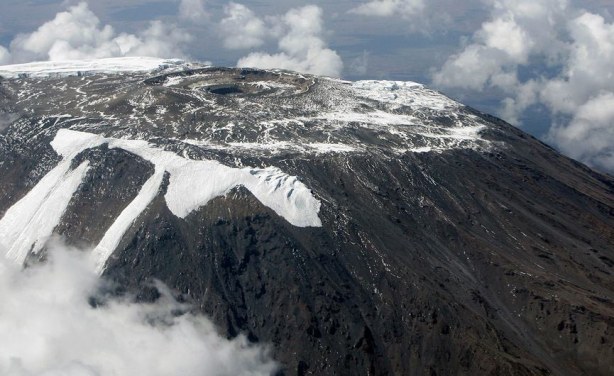 An aerial view of the dwindling ice on the summit of Mount Kilimanjaro (file photo).