Agriculture in Zimbabwe is on an upswing and young people are the driving force. For example, the country is set to harvest 2.8 million tons of maize in 2021, triple the 2020 harvest, and making it the highest output in 20 years. The anticipated 2021 bumper harvest should finally ensure food surplus in Zimbabwe, Information Minister Monica Mutsvangwa said in June 2021. Just a year ago, the United States Agency for International Development, USAID, doled out U.S.$$86.9 million to boost food security in the country.

About 57% of Zimbabwean women between ages 20 and 31 and 47% of men in the same age group are growing fruits such as mangoes, are involved in rearing livestock such as the prolific breeders Boer goats, and cultivating tobacco, corn and so on.

President Emerson Mnangagwa who took over the reins of government in November 2017 has adopted policies to attract the young and educated to farming while at the same time luring back many white farmers who had relocated to Australia, South Africa and the UK, following the seizure of their land about two decades ago, Audrey Simango writes for Africa Renewal. 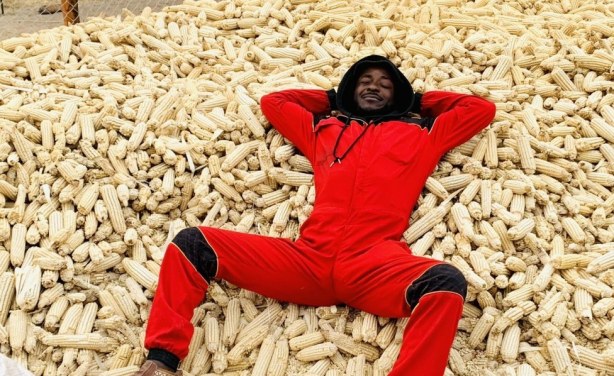 Terrence Maphosa with his maize harvest.