At least 13 members of Somalia's security forces were killed on Sunday (February 7, 2021)  in a roadside bombing attack, shortly after emergency talks failed to end a stalemate over how to select a new president. The bomb hit a convoy belonging to regional intelligence units, a military official said. The convoy had been traveling near the town of Dhusamareeb, which had hosted talks over the country's delayed election. The talks ended without a conclusion just days before the term of President Mohamed Abdullahi Mohamed - also known as Farmaajo - was set to expire. Mohamed flew back to Mogadishu, and addressed parliament on Saturday. Local news outlet Dalsan Radio reports that Mohamed said there was hope for more meetings on the elections. But Kenya's Daily Nation reports that key stakeholders have started warning they will withdraw recognition of Farmaajo as the head of state, if he chooses to stay on beyond February 8.

The president is elected by lawmakers - made up of 275 members of parliament and 54 senators. But the country has failed to hold the necessary ballot to choose new lawmakers, so no new president can be elected. The mandate of the current president  expires on February 8, 2021. 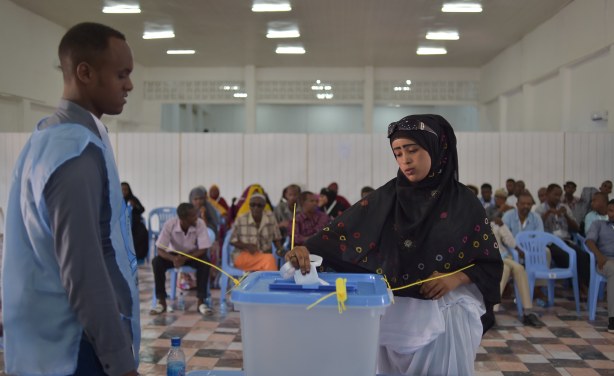 A delegate casts her vote in the electoral process to choose members of parliament into Somalia's House of the People in Mogadishu, Somalia, on 6 December 2016.